Good and Evil On the Rails

Good and Evil On the Rails

Read the Metrolink case study beginning on page 342 of the text as well as the Reuters article on train safety rules: Buffett May Benefit as Train Lobby Bids to Weaken Safety Rule. 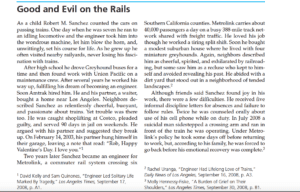 Yes, this accident could have been avoided. From the case study, it is clear that Sanchez had previously been caught not observing the rules of the Metrolink, such as using the cell phone while on duty. Metrolink should have replaced him with a sober Engineer. It is also clear that he…………………………..