In this assignment you are to write a letter to Sigmund Freud critiquing three of the most important concepts in his theory. You will need to include at least two reliable outside sources in your critique of Freud’s concepts. Scholarly sources are preferred and can be found through AUO’s Library.  Additional, non-scholarly sources from reputable Web and print sources are also acceptable. For reputable Web sources, look for .org, .net, or .edu sites as opposed to .com sites. Please do not use Wikipedia.

The three concepts you will be critiquing are the:

Begin your letter with a paragraph introducing yourself.

Each of the three issues should serve as a separate heading in your letter. Under each heading, include at least:

One substantive paragraph summarizing the concept clearly and thoroughly as Freud might explain it.
1-2 paragraphs,  critiquing the concept. Explain what you think is valid or invalid about his understanding of this concept. You are welcome to agree or disagree with his views but it is important that you attempt to bring in relevant and current research to substantiate your agreement or disagreement. This should be an objective critique of some of Freud’s concepts versus simply an opinion paper.

Follow this procedure for EACH of the three concepts mentioned above.

Conclude your letter with a paragraph summarizing your key points.

After completing the letter, include a paragraph or two explaining how Freud’s concept of the unconscious might be effectively used by a psychoanalytic therapist practicing today. Explain at least two techniques that might be used and the expected outcome of these techniques.

Submit your response to the M2: Assignment 2 Dropbox by December, 30 2014. Your paper should be at least 1200 words in length, follow APA style for attributing sources, and include a reference page.recognize and understand.25

Maximum
Points Provided an accurate and detailed summary of the three main concepts using terms that Freud would
ment that is supported by current research. Explained how Freud’s concept of the unconscious might be applied in contemporary therapy.

Identified at least two techniques that could effectively be used in working with the unconscious along with the expected outcomes. Wrote a paper in the form of a personal letter to Freud, in a clear, concise, and organized manner, maintained a consistent voice, and demonstrated ethical scholarship in accurate representation and attribution of sources, displayed accurate spelling, grammar, and punctuation. 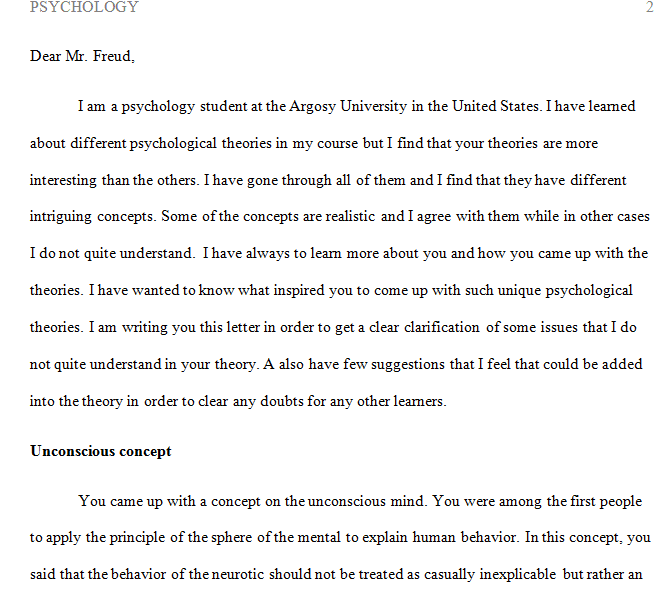