You have been selected to take one current 21st century innovation

An opening in the time-space continuum has appeared: 1909, as the Titanic is being built. Luckily, you’ve got some background information nestled in the Read section to help you out! You have been selected to take one current 21st century innovation (product, process, position, or paradigm) back in time to 1909, with the goal of changing the past to prevent as many lives being lost in April of 1912, whether that’s from keeping the ship from running into the iceberg, keeping the ship from sinking so quickly, getting all the people off the ship, etc. (You don’t have to worry that you will prevent your own birth.) What 4Ps innovation do you take with you? Why? How does the whole scenario play out? What do you think the long range consequences or implications are? It would probably be most fun to write the time travel/innovation story as a short story, but it won’t be a requirement. You will need to write at least 250 words, though. Here’s some motivation to do your task well (if you can watch the entire 1958 movie A Night to Rememberit’s more authentically tragic); this 1997 clip does the job in a few minutes 🙂 http://youtu.be/iHsx1cvACkY (might make you cry – don’t watch in front of others) 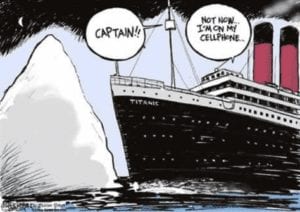 The Titanic tragedy was preventable. The disaster was as a result of poor judgment, inadequate disaster preparation and acts of prejudice (Mcelver, 2014). If I were to go back in time to 1909 during the construction of the Titanic, I would push to utilize the 4Ps of innovation (Ariss & Deilami, 2012)to change the past and save lives in the disaster as follows………………..