This discussion will involve playing a game from the Trend Micro cyber security company called Targeted Attach: The Game.

In the game you will play the role of the “CIO of a global organization called The Fugle, on the verge of making the first release of a biometrically authenticated mobile payment app. You will steer the project through its final stages, dealing with your internal security team, your colleagues in Marketing and PR and of course your CEO. There are many competitors and individuals out there who would love to get their hands on the data held by your organization at such a critical time. Can you make the right choices? Can you keep the project on time and on budget? Can you protect your company from attack?”

Play the game at: http://targetedattacks.trendmicro.com/

You may need to play the game a few times to find them but there is a combination of moves that you can make that will lead to a win.

After you have played the game go to the discussion area and create a post that addresses the following questions:
The game gives you multiple options to balance the needs of the various people: marketing manager, security manager, the CEO, the PR manager and the reporter looking to get a first view of the application. In the real world how difficult do you think it would be for a CIO to strike that balance? What should be their priority?One aspect of the game is the budget that you have to work with. How would you expect a CIO to balance the needs of their various business groups and IT departments (including security) and remain within their budget? 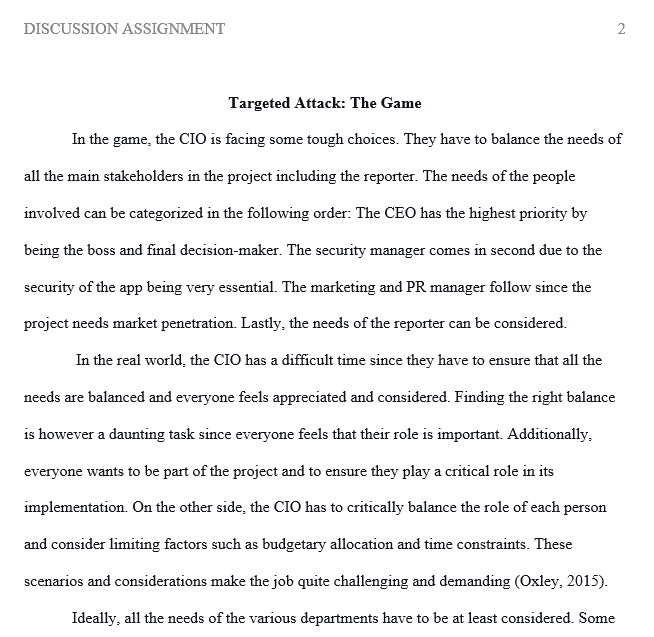