Dred Scott v. Sandford is the most infamous case ruled by the Court to date.

Dred Scott v. Sandford is the most infamous case ruled by the Court to date.

Dred Scott v. Sandford is the most infamous case ruled by the Court to date.
b) Lawyers, jurists, historians, and the American public universally condemn it for
its racism.
c) It involves one of the failures of justice in the Supreme Court.
Slavery in the South
i. The South entirely depended on slavery as a way of life.
ii. For Southern slave owners, slavery was a solution to both a complex
socioeconomic structure.
iii. The toil and sweat of enslaved black workers and their cheap labor aided work
on the cotton, rice, and tobacco fields.

BODY
a) Dred Scott was a black slave in Missouri who had yearned for his freedom.
b) After his previous masters, Peter Blow and John Emerson died; Scott’s worst
fears came true in 1843. Mrs. Emerson lent him and his family to her brother
John Sanford.
c) Sanford’s brutality made Dred Scott ask for his freedom from Mrs. Emerson, but
she refused.
d) Scott filed a suit in the Missouri Circuit Court on April 6, 1846, for his freedom.
e) Political tensions in Missouri complicated Dred Scott’s case.
f) Dred Scott’s lawyers could not prove that he was a slave.
g) The judges ruled it as a mistrial but the lawyers appealed, and a retrial began.

Solution preview for the order on Dred Scott v. Sandford is the most infamous case ruled by the Court to date. 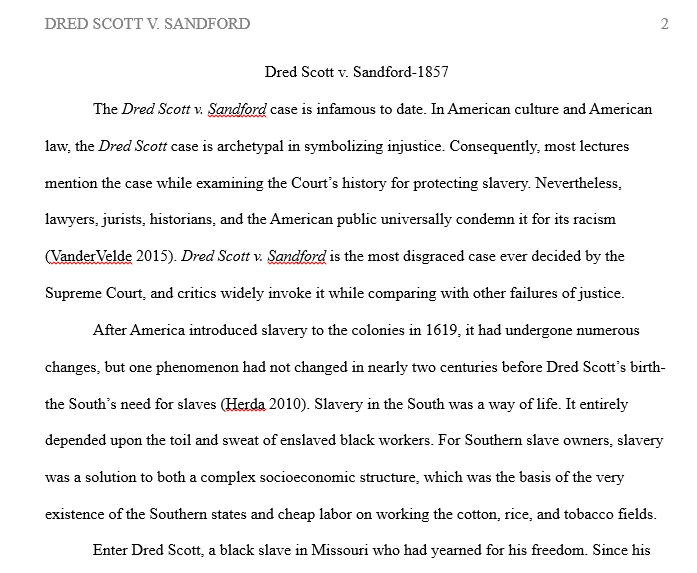